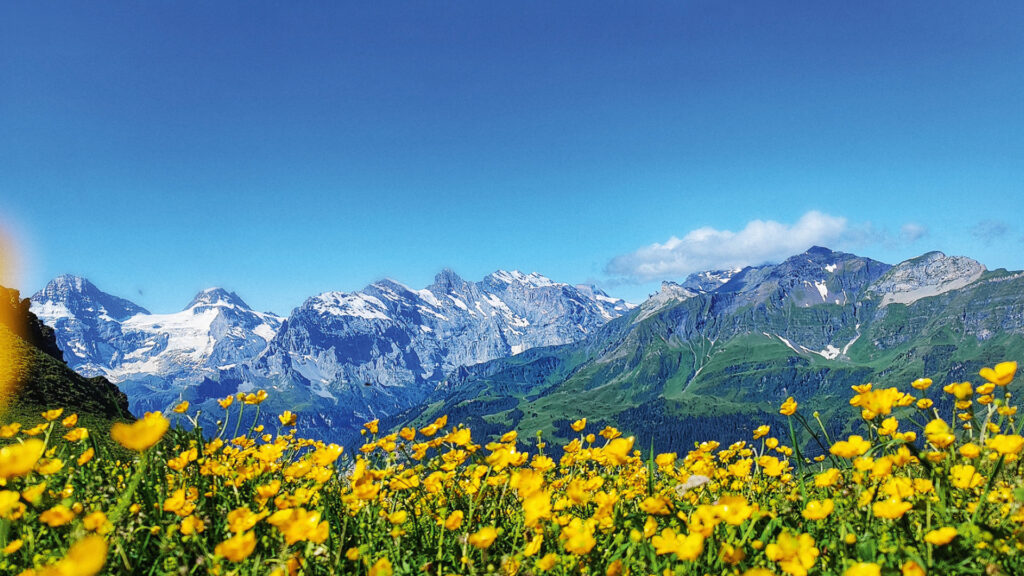 Explore the colourful glory of summer in Switzerland through a host of fun, adventurous activities.

It’s not often you find yourself standing amidst lush green meadows carpeted with gently swaying blooms, as ice-capped mountains loom before you. Yet, on a hike in the Swiss Alps, that is exactly where I found myself! Somehow, at some point during the trek, I had fallen back to admire the wild yellow flowers that seem to sprout everywhere in this part of the world during summer. Shutter happy,
I looked up to realise I was alone on the trail; the group I was hiking with had marched on ahead and there was nobody behind me as far as I could see. Alone on that trail on those meadows, before the majestic forms of the Eiger, Mönch, and Jungfrau mountains, I realised, again, why Switzerland is one of the most beautiful places on Earth. Surprisingly, given its small size, the Swiss nation has an immensely diverse landscape. And one of the best ways to experience its natural beauty, as I learnt, is to step out and start exploring the land through several fun adventure activities, suitable for travellers across all age groups.

My tryst with the Swiss outdoors began a few days earlier one balmy morning with an e-bike ride along the vineyard-lined waterfront of Lake Geneva. The Lavaux region consists of 830 hectares of terraced vineyards, stretching about 30 kilometres along the northern shores of this spectacular glass-like lake. While there are several hiking trails through the vineyards, I opted for an e-bike tour to add a bit of thrill to my exploration. After a delicious breakfast at my lakefront hotel, I set off on my e-bike with a guide leading the way through cobbled lanes winding in and out of vineyards, up and down slopes, and through sleepy medieval villages where life and architecture seemed frozen in time. The present vine terraces can be traced back to the 11th century, when Benedictine and Cistercian monasteries controlled the area. The roughly 200 family-owned wineries here produce quality wines organically, mostly consumed locally. This centuries-old tradition prompted UNESCO to list the Lavaux vineyards as a World Heritage Site in 2007. I spent some time soaking in the heritage and exceptional beauty of the place, until there was but one thing left for me to do—taste the wine. From the cellar of Mélanie Weber, the friendly host served a variety of crisp whites and rich reds from her estate, with traditional nibbles and a side of live music to go with it. It was a sublime experience, to say the least.

A couple of days later, I arrived in Interlaken. A popular tourist destination, this charming town is tucked between two alpine lakes— Lake Thun and the turquoise beauty that is Lake Brienz. I headed straight for a cruise on Lake Brienz to witness the spectacular mountain scenery firsthand. A fleet of five boats plies the lake, ferrying people back and forth between the little towns and villages that call the lake’s shore home. One of the most leisurely ways to enjoy the Swiss outdoors, the boat ride allowed me to sit back and enjoy the stunning views. You can step off at any of the scenic pit stops, stroll around, and get back on another ferry later. I disembarked at the roaring Giessbach Waterfalls, thundering 500 metres deep into the lake. Accessible by a 140-year-old funicular that takes you up a steep mountainside, the forested hilltop also has the historic Grand Hotel Giessbach right by the waterfall. After a hearty lunch at the hotel, I set off with the resident forest ranger on a wooded trail that took me behind the waterfall. The view of the hotel, lake, and mountains from behind the curtain of water is unparalleled!

Hiking in the Mighty Alps

These experiences so far were just a prelude to what awaited me at the fairy tale village of Grindelwald in the Bernese Oberland. This breathtakingly pretty hamlet is the gateway to the best summer hikes in Switzerland. A cable car from the Grindelwald Terminal took me up to the Männlichen Peak. While several hiking trails branch off from here, I chose the fairly easy, panoramic trail to the Kleine Scheidegg mountain pass. It was here that I found myself alone, as mentioned earlier, breathing in crisp alpine air and experiencing unadulterated peace and joy. From Kleine Scheidegg, I boarded a cogwheel mountain train for the last leg of my journey to Jungfraujoch— also known as the ‘Top of Europe’! Connecting the two major 4000ers of the Bernese Alps, the Jungfrau and Mönch, the glacier saddle of Jungfraujoch lies at an elevation of 3,463 metres and features the highest railway station in Europe. Standing there in the blinding white snow, with strong, cold winds threatening to blow me away, I marvelled at the dynamic beauty that is Switzerland and how it has something to offer for everyone.