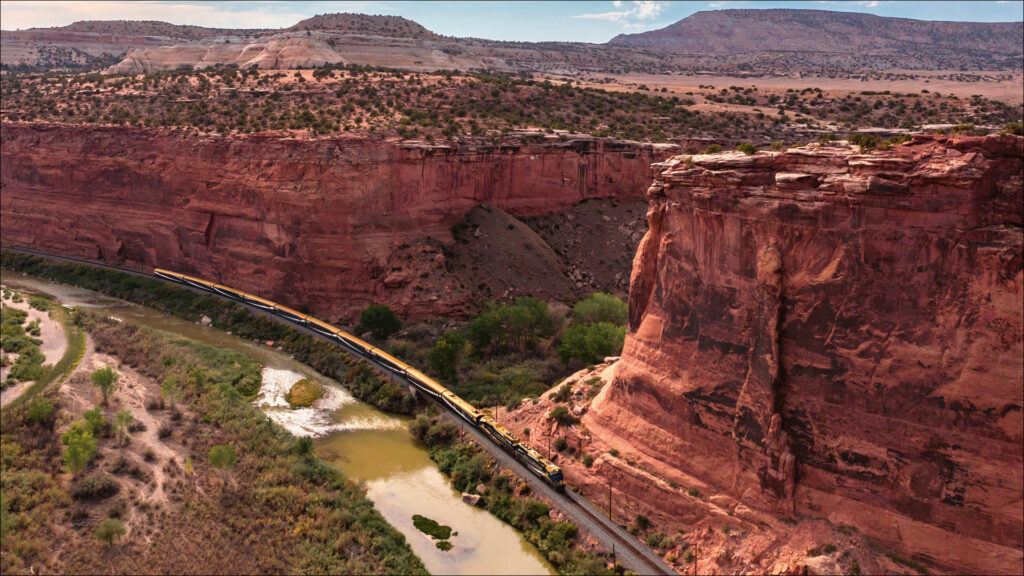 Explore The Beauty Of Friendship Through A Journey Of America’s Wild West!

Two childhood friends rediscover and celebrate their bond while discovering extraordinary landscapes on a train journey through Utah
and Colorado.

We left autumn behind and entered winter as we emerged at the other end of the tunnel; it was almost as if we had travelled through a space-time portal. The landscape of muted red canyons with bursts of cheery yellow foliage had metamorphosed into a blinding white scenery of rolling hills blanketed in soft layers of powdery snow. The blue, sun-dappled sky, too, seemed to have transformed into a moody, overcast one. The only thing that remained unchanged was the Colorado River, snaking its way through the terrain. Within the train, Deep and I sat with nary a care in the world, nursing the third Bloody Mary of the day in our hands, our gaze on the changing landscape whizzing past us outside the panoramic windows.

After keeping in touch through WhatsApp over the course of the pandemic, I found myself in the USA this October to meet an old friend. The reunion needed to be celebrated with something extraordinary. The Rocky Mountaineer, a Canadian rail tour company offering luxury train journeys through some of the most spectacular scenery in North America, came to the rescue. We opted for their 2-day ‘Rockies to the Red Rocks’ route in the USA, which would take us through two unique destinations— Utah and Colorado, or the heart of America’s Wild West!

“Do you remember the pond in our school compound? And the herd of elephants that’d come down there every afternoon for a bath?” I asked Deep, my friend of almost 30 years and counting. “Of course! And I also remember how the entire class would stare out the windows at the spectacle, until our teacher scolded us to get back to our lessons,” he laughed. I smiled fondly. “Did you ever imagine that, one day, we’d travel together through one of the remotest corners of
a country halfway around the world?” I asked. “Not in a million years,” he replied.

All the Westerns I had watched growing up couldn’t prepare me for what lay ahead, as I boarded the shuttle to Moab from Salt Lake City on a crisp autumn morning. As the capital of Utah, the latter had already left quite an impression on me the previous day with its friendly, laidback charm and beautiful mountains. I had spent my day driving up to Big Cottonwood Canyon, popular for its ski resorts and hiking trails—barely 15 minutes from Downtown SLC. The mountains were covered in snow, and the scenery was reminiscent of a wintery fairy tale. Later, I had strolled through the scenic Sugar House Park and its eponymous neighbourhood with al fresco cafés, yoga studios, tattoo parlours, and boutique stores.

Early next morning, I embarked on my five-hour shuttle ride to the city of Moab, the adventure epicentre of Utah. Soon, we left the last vestiges of civilisation behind, and the landscape took on a drab, brooding look. I dozed off at some point and when I awoke and looked out the window, an audible gasp escaped my mouth. For a second I felt like I had boarded the shuttle—to Mars! The scene outside can only be described as other-worldly. Towering red rock formations rose majestically on either side of the road, some in the shape of high hills, others with a flat top or mesa—set against a backdrop of the snow-capped La Sal Mountains.

I was still awestruck as I entered the lobby of the chic Hoodoo Moab Hotel, and was greeted with a warm hug by Deep, who had flown in to Moab’s tiny airport. “Wait till the gang sees this photo. They’re going to be so J!” I said, as we clicked the first of many selfies of the trip. “You know you can say “jealous” like the ancient millennial you are, instead of trying to pass off for some cool Gen Z kid,” Deep teased, as always.
I retorted with a punch to his arm. It was like no time had passed from when we last met. We had a lot of catching up to do but first decided on a stroll through the town, vibrant with restaurants, cafés, and shops, all brimming with an Old West charm. A guided tour took us to the breathtaking Arches National Park, with over 2,000 natural sandstone arches, soaring pinnacles, and giant boulders precariously balanced on one another. It was here that we caught the fiercest sunset of our lives that turned the sky all shades of crimson to mirror the red of the earth on which we stood.

The next day, we were driven to a makeshift railway platform outside of town. Here, the Rocky Mountaineer stood in all its royal blue-and-golden glory. A red carpet was rolled out, champagne served, and
thus began the journey of a lifetime.

The ethereal beauty of the American Southwest was on full display as the train snaked through Utah and into Colorado. It was as if we had been transported to the sets of a Western; a cowboy could come by on his horse any minute, guns slinging, and a hat drawn low over his eyes. The visual conjured by the landscape was complemented by the animated commentary of our host, Michael, who narrated stories of (in) famous cowboys, while pointing out landmarks along the way—the Henry Mountains, called the ‘Galapagos of Utah’ and home to 60 species of bees; the vibrant Ruby Canyon along the Utah-Colorado border; Grand Mesa, the world’s largest, flat-topped mountain; and the town of Palisades, known for its vineyards and peach orchards. Soon, we neared our destination for the night—the resort town of Glenwood Springs.

Set amidst the Rocky Mountains, Glenwood Springs is saturated with must-visit places: the wildlife-rich Glenwood Canyon, the strikingly turquoise Hanging Lake, the ancient underground caves of Glenwood Caverns. Yet, it’s the public hot springs pool—the largest in the world—that is its biggest draw. Which is where we headed upon disembarking. The bone-chilling temperature outside had little effect on us as Deep and I sat neck-deep in the soothing hot spring water, with mist rising around us. Our conversations turned deeper as well, as we discussed life, work, relationships… In those moments, our bond, wherein we could share anything without worry of judgement, felt rejuvenated.

The next day, we resumed our journey towards Denver. The now familiar faces of our co-passengers greeted us with warm smiles. Much banter was exchanged over breakfast and cocktails, as we ventured deeper into the Colorado Rockies and the landscape transformed into a winter wonderland. Today’s prime attractions were a town named ‘No Name Town’, another named ‘Partial’, and the Rocky Mountain National Park with the 14,000-feet-high Longs Peak. We spotted several wildlife here, too, including Pronghorn antelopes, bald eagles, and coyotes; the sight of beavers swimming in the Colorado River sent everyone into a tizzy of excited squeals.

After lunch, Michael announced we would soon enter the Tunnel District, with 28 tunnels of varying lengths, beginning with the Moffat Tunnel, and ending with one just before Denver. A 6.2-mile-long engineering marvel built under 4,000 feet of rock at a height of 9,200 metres above sea level, the Moffat Tunnel was especially exciting as it cuts right through the Continental Divide—the hydrological divide of the Americas, separating the river systems draining into the Pacific Ocean from those draining into the Atlantic Ocean.

The passengers burst into applause and raised a toast to a wonderful journey as we made it out through the last tunnel and chugged the last few miles towards Denver. Deep and I clinked our glasses for a private toast of our own—to celebrate a friendship that has endured through time, distance, and life events, with the hope that it grows in the years to come!

GETTING THERE
Fly to Salt Lake City with Vistara’s codeshare partners Air Canada and United Airlines.