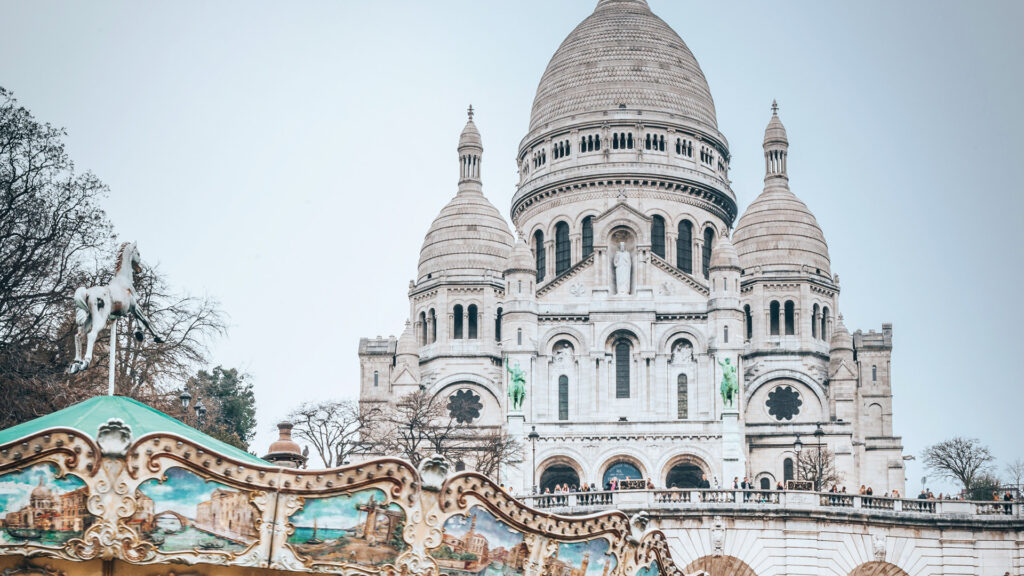 Discover another side to the City of Love with a tour of two vibrantly alive neighbourhoods, home to a stimulating art, architecture, and culture scene.

First-time visitors are justifiably awed by her world-famous landmarks. But return to the City of Love again and again, take the time and effort to know her better, and Paris will reveal herself slowly and mysteriously for the truly enchanting city that she is. For beyond her popular sights are neighbourhoods bustling with a rich artistic heritage, and an aspect of the French capital to which only the most curious and ardent are privy. We’re talking about the absolutely gorgeous districts of Montmartre and Montparnasse. For a largely flat city, these are the only two communities built at an elevation—one on the sole hill in the north, and the other in the south, on an erstwhile hillock that was later flattened. Panoramic views aside, these two neighbourhoods are also a deep dive into the cultural fabric of Paris, as they both served as the artistic and intellectual heart of the city at different points in time.

The Magic of Montmartre

Perched atop a small hill or butte in the 18th arrondissement, Montmartre has historically been one of the most popular melting pots of art and culture. On my first few visits here, I soaked in its lively atmosphere on foot, climbing the 200-odd steps to the very top of the district. This time, I chose to explore it with a certain dramatic flair—in a convertible vintage car! There are several operators who run such tours; Travel Curious, especially, offers interesting itineraries with guides who combine local knowledge and storytelling to present intimate details of a place in the most engaging of ways.

The morning was a particularly balmy one, which was a pleasant surprise given the sweltering European summer this year. My guide Pierre arrived at my hotel in a cheery, blue and yellow 1982 Citroen 2CV, with the canvas roof rolled down and old French songs playing over the radio. The sun was soft and the breeze cool—the perfect day to waltz around Paris in an open-top, vintage car. We arrived in Montmartre sometime before noon; the wide-open, tree-lined avenues gave way to a maze of narrow cobbled lanes climbing steeply up the hill. From between the tightly lined Haussmann-style buildings, the characteristic architectural style of Paris, the magnificent Basilica of Sacré Coeur played peek-a-boo.

“So, why is it called Montmartre?” I asked Pierre, as we waited at a crossing for a group of pedestrians ambling across the street. Nobody seemed to be in any hurry, including Pierre who told me about the place’s history in a French-laced drawl. A 9th-century text describes the beheading of a certain Saint Denis, a bishop, at the hilltop in 250 BCE; his crime was preaching Christianity to the Gallo-Roman inhabitants of the time. As per the tale, the bishop picked up his severed head and walked down the slope, where he breathed his last. A chapel was built at the spot and the hill came to be known as ‘Mont des Martyrs’, later Gallicised to Montmartre.

In 1134, King Louis VI upgraded the chapel to the Church of Saint Pierre de Montmartre, which still stands today as one of the oldest surviving churches in Paris. Montmartre remained outside city limits until 1 January 1860, when it was annexed and became a part of Paris. The Basilica of Sacré-Coeur was later built at the hilltop as a symbol of France’s penance for the French Revolution. Designed in a Neo Byzantine-Romanesque style, the white-domed church is magnificent not only in its architecture but also the view it affords of all of Paris, as well as the countryside for 50 kilometres around! Time flew by as I stood marvelling at the panorama, before heading inside to be amazed by yet another spectacle—the largest and most important religious mosaic in France, Christ in Majesty, made with 25,000 enamelled pieces of ceramic, covering a massive 475 square metres
of ceiling space.

A treat for the art lover in me was up next. During the Belle Époque from 1872 to 1914, numerous artists and musicians moved to Montmartre for its low rents and congenial atmosphere. French Impressionist painter Pierre-Auguste Renoir rented a space at 12 Rue Cortor, later inhabited by Montmartre-born artist Maurice Utrillo and Fauvist painter Raoul Dufy. The building now stands as the Musée de Montmartre. Pablo Picasso, too, lived in the neighbourhood—he painted one of his most important masterpieces, Les Demoiselles d’Avignon, here—and so did Vincent van Gogh, Pierre Brissaud, and
a host of other famous artists.

By the end of the 19th century, the butte became known for its cafés, guinguettes (open-air taverns), and cabarets. The Le Chat Noir, a bustling nightclub founded in 1881, became an immensely popular hangout for writers and poets. Soon after, the Moulin Rouge was established, which became the birthplace of the French cancan dance. Interestingly, many of the cabarets, including the famous Moulin Rouge, still operate today, dividing Montmartre into two sharply contrasting areas—one glamorous and titillating with neon signs;
the other, bohemian, artsy, and free in spirit.

The Mystery of Montparnasse

At the onset of World War I, many of the artists who called Montmartre home, scurried bag, baggage, and easel down the
hill and across the Seine River to the south of Paris, where they
found a new home in the only other hilly neighbourhood, Montparnasse. I followed in their footsteps and found myself in
the hip and bustling district one afternoon. Back in the day, this
was a world apart from what the artists were used to in Montmartre— economically, socially, and politically. Unlike its more elite and sanitised contemporary, Montparnasse was gritty, tough, and uncompromising, filled with near-penniless immigrant artists, sculptors, writers, poets, and composers from around the world,
who had fled the suffocatingly conservative Anglo-Saxon regimes in favour of artistic freedom.

Yet, the neighbourhood thrived and became the heart of Les Années Folles or ‘The Crazy Years’ in the 1920s—often described as the Golden Age of Paris. Post WWI, the city had transformed into the home of the avant-garde with the advent of Cubism, Surrealism, and Dadaism. And Montparnasse became the centre of this new euphoric world, emerging as the most prosperous and prolific art colony of the 20th century. Besides popular artists, numerous famous writers called it home, too, including James Joyce, Ernest Hemingway, Marc Chagall, Henry Miller, and others. It was a community where creativity was embraced with all its oddities.

Many such stories emerged as I walked through the neighbourhood, flitting in and out of its many galleries and cafés, and especially at the Cimetière du Montparnasse, where several celebrities are buried, including Jean-Paul Sartre and Samuel Beckett. I couldn’t have been more content, but another delight awaited—the best French crêpes in the city from one of the countless crêperies here. In my experience, a day is not enough to unearth the many mysteries of Montparnasse. As I found my long summer day here swiftly morphing into night, I made my way to one last attraction of Montparnasse—the Catacombs
of Paris!

An underground network of tunnels built to consolidate the city’s ancient stone quarries, the Catacombs came into their present being in 1810. In an effort to accommodate the city’s overflowing cemeteries, it became an ossuary to hold the remains of more than six million people. Largely forgotten for some years, it was opened to public visitation in 1874. Given all the artistic energy flowing above ground
in Montparnasse, it was all but natural for some of it to seep down below, as the Catacombs soon became a novelty place for concerts, art shows, and other events. Today, it is one of the 14 museums managed by Paris Musées, and is open to the public for thrilling
night tours.

As I emerged from the upside down into a quiet Parisian full moon night, my eyes still getting used to human faces after looking at skeletons for hours, I could’ve sworn I heard a piano play the ‘Moonlight Sonata’. Whether it was a musician perfecting their notes
in one of the bars that was still open or the echo of a Catacomb concert from the past, that remains to be seen!

Related: Discover The Beautiful Architecture Of Paris Through A Series Of Unique Photographs