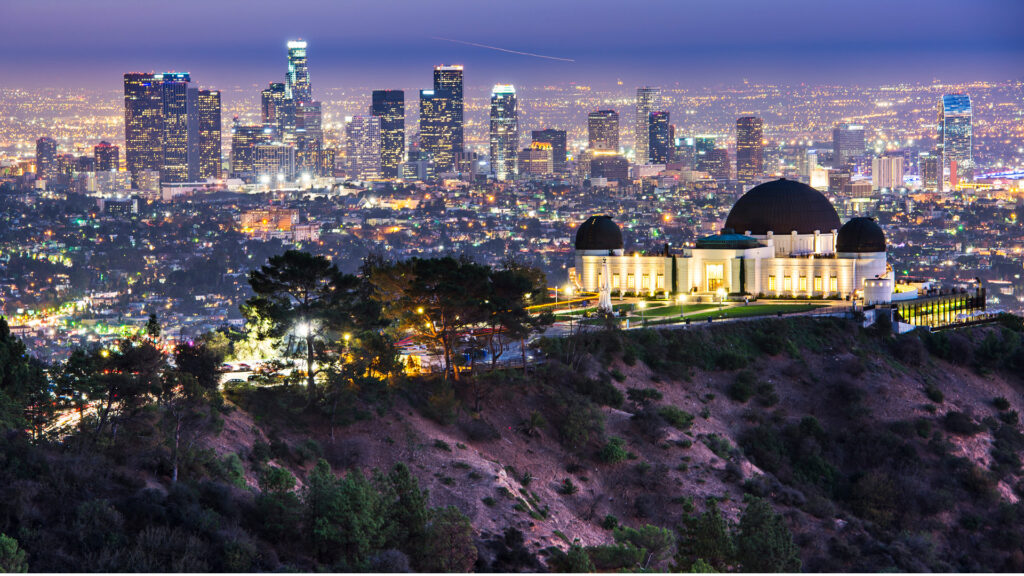 City of Angels, The Big Orange, Tinseltown, or La-La Land—Los Angeles goes by many names. What remains constant through its versatile identities and neighbourhoods is an irresistible, irrevocable verve that’s hard to ignore.

It’s fascinating how a city brimming with movie stars is a superstar in its own right, birthing trends by the second with an inherent flair. Oddly, my first encounter with Los Angeles’ many charms steered off the obvious celebrity-spotting jaunts. It was at the historic (since 1917), food court-style Grand Central Market—in the city’s downtown district—where I had an enlightening brush with Los Angeles’ vibrant and delicious cultural diversity. Here was a gourmet paradise reflecting the multi-ethnic communities that call this metropolis home. Michoacán-style carnitas, Mexican tacos, Vietnamese bánh mì, Japanese katsu (breadcrumbed-fried meat or vegetables) sandwiches, Salvadoran pupusas (stuffed flatbread), artisanal coffee, and classic American lobster rolls—all vying to be tasted! As an ode to LA’s Spanish founders, I opted for a round of tostadas at Tacos Tumbras a Tomas for breakfast. And followed that up with a burrito—after all, I needed the carb overload for where I was headed next.

A 10-minute cab ride brought me to Griffith Park. Covered in chapparal shrubs and crisscrossed with trails, it’s the largest urban-wilderness municipal park in the country. On one side is the upscale neighbourhood of Los Feliz; on the other, the sprawling Griffith Observatory. No matter where I looked, however, there was one ubiquitous sight: the Hollywood sign! Shiny and iconic. My hike up to the observatory was punctuated with endless selfies every time I saw
it from a new angle. I was also intrigued by the unending opportunities to people-watch: joggers in their athleisure finery, designerwear adorned women exercising with their chihuahuas in tow, iron-willed cyclists, and kids following in their stylish parents’ footsteps. The exclusive vibe of my fellow hikers was in stark contrast to the Grand Central Market’s humble, heartwarming ambience—it depicted the duality of a city that has entertained everyone for long.

It had been an activity-filled morning and I returned to my hotel, the Millennium Biltmore, to relax before I could conquer the rest of my itinerary. Interesting fact: It was here that the Academy Awards® were first conceptualised, proving it’s true that filmdom history whispers from almost every corner of Los Angeles.

True to theme, my next stop was the renowned Hollywood Boulevard. I was scheduled for a guided tour of the Dolby Theatre—the grand home of The Oscars. The guide took our group through the sprawling 1,80,000-square-foot cinema, showed us an Oscar statuette, and pictures of past winners and iconic moments. As part of a fun quiz,
she asked us to name the movie for which Julia Roberts won an Oscar.
I was the only one who answered correctly. (Most people assume it to be Pretty Woman. Can you guess which one it is? See the answer at the end of the article).

After the tour, I headed to the Hollywood Walk of Fame, encountering several buskers, mimics, and artistes dressed as famous superheroes on the way. Selfies with the ‘stars’ dotting this sidewalk are mandatory: I got mine with Jack Black, Martin Scorsese, and Shrek! To end the day, I ate where celebs love to get their occasional fix of calories: In-n-Out Burger on Sunset Boulevard. I tucked into possibly the best fries and cheeseburger I have ever tasted, and wondered how else LA could surprise me.

As it turns out, the city has many more tricks up its sleeve! The next part of my trip was spent in Venice, an eclectic beach-town located on Los Angeles’ Westside. This bohemian enclave abounds with hippies, artists, fortune-tellers, and all kinds of eccentric performers. I decided to acquaint myself with the area by hiring a cycle and cruising down its Ocean Front Walk, which leads to the Santa Monica Pier. I rode past shops selling avant-garde antiques, curios, tie-dye clothing, as well as dog walkers (with at least five mutts on leash!), and skateboarders. It was the US$2 fish tacos at one of the many stands that made me stop for a delicious bite. A friendly souvenir shop owner pointed out the building atop which my favourite band, the Red Hot Chili Peppers, filmed their music video for The Adventures of Rain Dance Maggie.
Of the many murals dotting this area, the one with Arnold Schwarzenegger flexing his muscles is a must-see! It was a magical day.

The next morning, I battled the Pacific Ocean’s waves by attempting surfing lessons with the Fun Surf LA School. Ravenous after the experience, I headed to Abbot Kinney Boulevard, considered the ‘Coolest Block in America’. High-end boutiques, minimalist, whitewashed buildings, towering palm trees, and uber-chic residents: this place has it all. A health-conscious meal of avocado tikka and kale hummus at Plant Food + Wine hit the spot.

That evening, as I sat at Venice Beach, watching the city twinkle
on the horizon, my heart began to hum, just like La La Land’s Sebastian Wilder sang: ‘City of stars, are you shining just for me…?’
I was spellbound.

GETTING THERE
to Los Angeles with Vistara’s codeshare partners Air Canada and British Airways.