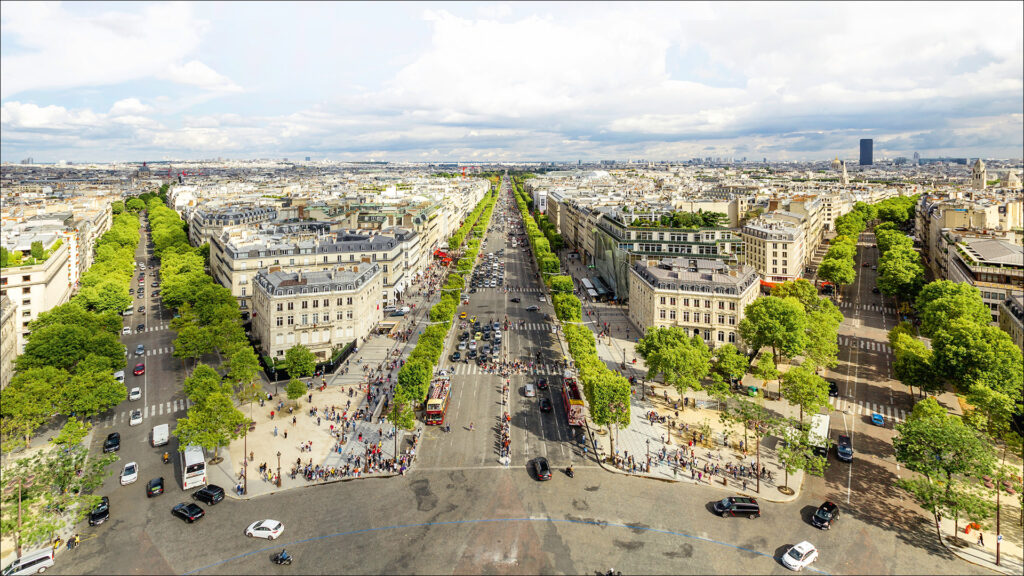 What do Champs Élysées, Gran Vía, Rodeo Drive, and Orchard Road have in common? They are some of the most stylish destinations in the world. Here’s why they must feature on every well-heeled traveller’s itinerary.

High streets or central avenues, offer an insight into a city’s culture by way of their design, architecture, entertainment offerings, Instagram worthy spots, and clientele. They can also be the sole reason for people to travel to a city—about 3,00,000 people visit the Champs Élysées every day to see its historic sites, while thousands head to Madrid to explore the nightlife of Gran Vía. Here are our picks of the world’s most stylish streets for the trendy traveller.

This sprawling street has captivated history, politics, culture, and fashion aficionados through centuries. Few know that Champs Élysées was once a marshy backyard where members of the French royal family grew fruit and vegetables! Uncover these amusing facts and more on several guided tours conducted across the length of the avenue, which also hosts historical monuments like the Grand Palais, numerous parks and ornate fountains that have become popular  popular picnic spots, and the grand Arc de Triomphe that honours slain French soldiers. One of the world’s most fashionable avenues, Champs Élysées is renowned for heritage buildings like the Hôtel de Coislin, iconic theatres including the Théâtre du Rond-Point and Théâtre Marigny, classy restaurants, and boutiques representing almost all high-street brands.

Witness the glory of the boulevard by walking from Rond-Point des Champs-Elysées to Arc De Triomphe, followed by a meal at one of the street’s famous brasseries to practice the French art of flânerie (people-watching and witnessing the day unfold at a leisurely pace).
Le Fouquet’s, a cafe that has been a favourite of the likes of Winston Churchill and Charlie Chaplin, is a great place to watch the city go by, as is Ladurée, a classic salon with silk drapes, stucco ceilings, and gilded walls, straight out of Paris of the 1800s. Leaving the city without sampling its macaroons, croissants, pastry, and tea will be an injustice to the elegant spirit of France’s capital.

GETTING THERE
Vistara offers twice-weekly direct flights between Paris and Delhi. *Subject to change.

Ever wondered where the who’s who of Hollywood shop? A walk down Rodeo Drive in the Beverly Hills neighbourhood of Los Angeles will reveal the answer to that question. A classic high street made famous by Julia Roberts in Pretty Woman, Rodeo Drive is the playground of celebrities, stars, supermodels, and a great place to spot them, too. The three-block area brims with boutiques aiming to outdo each other—a steely Louis Vuitton façade juxtaposed against the stark Prada storefront, a modern Burberry building towering near the classical Dior structure, and the yellow-coloured Bijan boutique (believed by many to be the world’s most expensive menswear store) outshining everyone else under the glorious Californian sun.

While an appointment is needed to enter most shops here, its Walk of Style has no such prerequisite. Helmed by the 14-feet-tall aluminium sculpture of a torso by Robert Graham, the walk recognises famous stylish folk like Tom Ford, Giorgio Armani, and Salvatore Ferragamo through bronze plaques set into the sidewalks. Finish off this glamorous visit with refreshments at the Beverly Wilshire Hotel and emulate Julia Roberts and Richard Gere from their famous movie,
even if it’s just for a day.

GETTING THERE
Fly to Los Angeles with Vistara’s codeshare partners Air Canada and British Airways.

A star in its own right, this elegant avenue has featured in Hollywood movies, classical literature (remember how the The Sun Also Rises by Ernest Hemingway ends with Jake and Brett in a taxi on Gran Vía?), and recently, in the popular online series, Money Heist. Often referred to as the ‘Spanish Broadway’, Gran Vía offers a cultural extravaganza to visitors with its cinemas, flamenco performances at Teatro EDP Gran Vía and La Chocita del Loro, and theatre shows at Cine Capitol, an Art Deco building that opened in 1933.

It’s also the place where Madrid’s crème de la crème socialises. Rub shoulders with the city’s rich and famous as they shop at stores like Loewe, where legendary American actress Ava Gardner bought her exclusive handbags, or walk into branded stores like Chanel, Dior, and Carolina Herrera for a taste of luxury. The architectural gem on Gran Vía is undoubtedly the Metropolis Building, known for its ornate dome and four exquisite sculptures by Saint Marceaux and L. Lambert. There’s also the Telefónica Building, an Art Deco structure, which was the tallest tower in Europe until 1940. End your tryst on a playful note by stopping by the Casino Gran Vía.

GETTING THERE
Fly to Madrid with Vistara’s codeshare partners British Airways, Lufthansa, and Swiss.

What is the first image that comes to mind when we say Dubai? Glitzy malls, sky-kissing towers, fast cars, sandy beaches, lush parks, and palm tree-lined drives? Rest assured, you’ll find all this and more along Dubai’s hip Sheikh Zayed Road. A barren highway until the 90s, it is, today, the Emirate’s longest avenue, dotted with modern icons attracting tourists every day.

Futuristic skyscrapers like The Hilton Dubai Al Habtoor City, Shangri-La Dubai, Gevora Hotel, Latifa Tower, and the Al Yaqoub Tower are some of its must-see spots. Nature lovers and those craving a moment of quietude in this bustling metropolis can head to the sprawling Zabeel Park (home of the Instagram-worthy Dubai Frame) and serene Ghantoot Beach, located along this street. The Museum of The Future showcases stunning exhibits, including a simulation of a trip to outer space. Smart, spirited, fast, and efficient, Sheikh Zayed Road is truly the face of the future.

GETTING THERE
Vistara offers daily direct flights between Dubai and Mumbai.

This lively avenue is a metaphor for this city-state—wilderness that’s transformed into the epicentre of fortune over the past two centuries. On offer are a melange of all things Singapore: modern shopping malls, colourful Chinese Baroque houses, luxury hotels, happening high-street labels, incredible clubs and pubs, a host of cinemas and theatres, and an effervescent street-food scene, with a sprinkling of parks and gardens. While the malls here offer the finest brands and bargains, it’s the artwork that sets the street apart. A self-guided walk covers most of the iconic installations.

Begin at sculptor Stephanie Scuris’ Harmony Fountain in front of the Regent Hotel and then move onto Li Chen’s Dragon-Riding Bodhisattva and Singaporean Cultural Medallion holder Ng Eng Teng’s Mother and Child installation at the Oxford Parade Hotel. End at the Eulogy to Singapore that stands at The Hilton Singapore Orchard. In between all the sightseeing, stop by any of the many artsy cafés and restaurants like Leckerbaer and Merci Marcel, known for their stylish interiors and snacks. For a more luxurious break, Ginger.lily at the chic Hilton Singapore Orchard serves beautiful small eats and tea.

GETTING THERE
Vistara offers daily direct flights to Singapore from Delhi and Mumbai.

Not all high streets revolve around glitzy malls. Durban’s Golden Mile is a fine example of one that goes beyond retail therapy. The four-mile-long promenade gets its name from the glistening golden sand along the beaches it faces—flanked by the Indian Ocean on one side and majestic Art Deco buildings on the other. Beloved by the locals who get together to play and relax here every evening, the boulevard is home to a host of places of interest for all age groups.

This includes the uShaka Marine World, Hammerhead Shark Rearing Area, Durban Funworld, and Suncoast Casino. It’s the lure of the watersports, however, that draws both locals and tourists every day. South Beach is the place to be for those still learning the basics of surfing, while North Beach is great for swimming and surfing. The Bay of Plenty is an exciting fishing spot. Later, head to trendy Moyo at the uShaka pier for delicious African fare accompanied by soothing African jazz music.

GETTING THERE
Fly to Durban with Vistara’s interline partners Emirates and Qatar Airways.