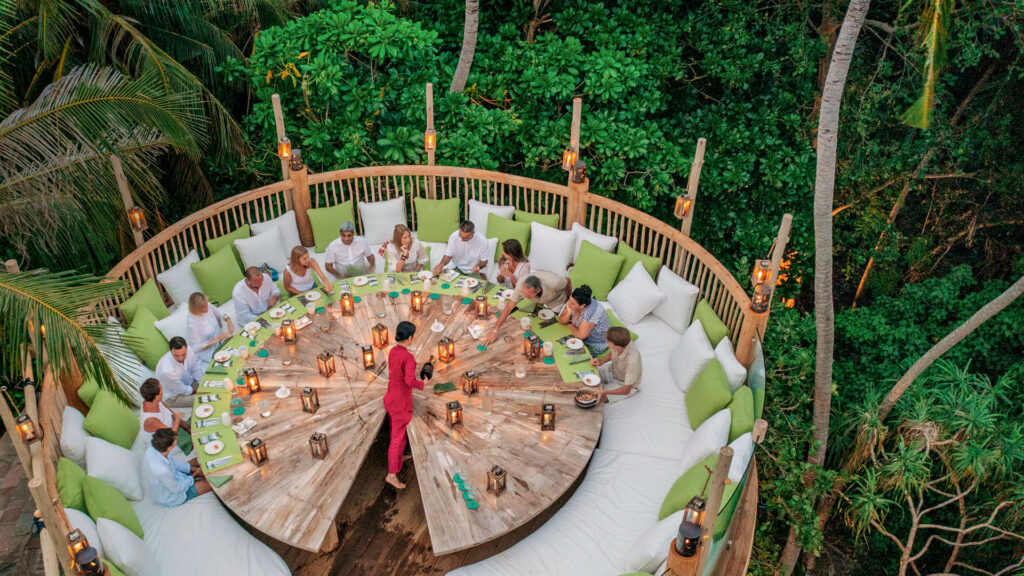 8 Unique Michelin-Starred Restaurants Across The World

As the coveted Michelin star casts its golden
glow upon the unexpected, join us on a culinary journey like no other, exploring eight unique eateries and celebrated chefs awarded this symbol of gastronomic excellence.

The benchmark for excellence in the culinary world has long been Michelin. And while this magic word instantly conjures up images of extravagance and opulence, there are several hidden and some not-so-hidden gems that offer the most surreal, bizarre, and coolest dining experiences you can imagine. The best part—you may end up paying just ₹300 for a spectacular meal! Intrigued? Then read on.

Taking dining to the next level, quite literally, Soneva Fushi has created a unique experience that combines an adrenaline rush with fine dining. Begin your culinary journey at a magical venue—a tree canopy set high above a lush jungle, offering stunning vistas of the ocean. How do you get there? Gliding along a zip line over the forest! Interestingly, the food reaches you via the same route. And adding that exceptional touch of flavour to this innovative dining experience is the specially curated menu by a stream of rotating Michelin chefs, thus ensuring there is always something new to savour. The first chef to take the helm hails from the hugely acclaimed three Michelin-starred restaurant Odette in Singapore—Chef Julien Royer. The multicourse menu combines the finest of locally sourced ethical ingredients with
a unique flair and panache. You may never want to descend from your culinary canopy!
Price per person: From ₹13,550/US$175 to ₹46,000/US$595; soneva.com

Set within the renowned Guggenheim Museum in Bilboa, the Nerua is one of a handful of Michelin-starred restaurants directly connected to a prominent art gallery. Reflecting the museum’s ethos both architecturally and thematically, the fare served here is contemporary and modern. And much like the artwork that inhabits the museum, the dishes take centre stage within this minimalist environment. Beautifully sculpted out of unassuming local seasonal delicacies under the genius of Chef Josean Alija, each creation masterfully celebrates one or two hero ingredients, allowing them to shine on the pure white canvas of the plate. The artistic synergy between restaurant, chef, and location ensure that this experience is truly a masterpiece.
Price per person: From ₹5,800/US$75 to ₹6,580/US$85; neruaguggenheimbilbao.com

Picture a semi-submerged restaurant that appears to have crashed into the frigid North Atlantic Ocean. Now see it in reality. Simply named Under, the monolithic, concrete structure blends effortlessly into the vast landscape. In fact, the simple, unfettered, and elegant property could, potentially, serve as a villain’s lair in a James Bond film. The restaurant plunges 5.5 metres beneath the tumultuous waves allowing the floor-to-ceiling windows to provide panoramic views into the blue depths of the ocean. The pale light streaming in from the underwater world envelops the dining room in an otherworldly aura. The meal is equally unfamiliar as the ingredients are sourced and for aged from the surrounding areas and include products such as arrow grass and spiderlike molluscs. The rugged beauty of the stark surroundings, however, is softened by the delicate touch of the visually appealing preparation and the exquisite taste of these distinctive ingredients.
Price per person: From ₹20,670/US$267; under.no

From the depths of the ocean to deep inland, The Angel at Hetton
is located in the heart of the Yorkshire Dales National Park in
a converted 15th-century inn. The much-in-demand patron-chef Michael Wignall set up the charming gastropub with his wife Johanna in 2018. The graceful elegance of the property is reflected in the simplicity of the food. For instance, the dishes are known simply by their key ingredient, while the other ingredients are there to showcase the star ingredient. There is a precision in Wignall’s food, which means nothing is placed on the plate purely for show. Instead, each element adds to the sensuality of the dish in its technical perfectionism. The Angel also serves as a retreat with rooms, and after a stunning meal, one has the option to retire to the equally tasteful rooms.
Price per person: From ₹8,207/US$106 to ₹11,613/US$150; angelhetton.co.uk

One of the world’s most innovative chefs, Heston Blumenthal has changed the way we look at food with his personal motto: Question Everything. As a result, despite celebrating its 25th anniversary this year, his restaurant—The Fat Duck—remains at the top of its game. Behind the unobtrusive exterior of this quiet English country-village restaurant is a world of multi-sensory experiences curated by sheer genius or total madness, whichever way your taste buds land. With each dish, Blumenthal narrates a story, weaving a link to dormant memories—a walk through the forest, holidays by the beach, and more. His creations range from meat that looks like fruit, dissolving watches that become mock turtle soup, and desserts that pop out of wind-up doll houses, causing guests to question everything laid before them. Bookings are made a year in advance; it’s worth the wait!
Price per person: From ₹26,788/US$346 to ₹36,544/US$472; thefatduck.co.uk

Named after South Korea’s Jeju Island, the Jeju Noodle Bar in New York has reimagined Korean food into a hug in a bowl. Chef-owner Douglas Kim of the West Village restaurant has managed to elevate the humble ramyun (a Korean noodle-based soup like ramen) by introducing global elements into traditional dishes, making them perfectly suited to modern tastes. While the menu in this casually designed eatery is ramyun centric, it does have other gems, including several hwe dishes (Korean sushi), Korean fried chicken, and barbecued ribs. The non-veg heavy menu contains some vegetarian gems, too, such as the Buhsut Ramyun (mushroom-based ramyun) and the Truffle BimBim Myun (tofu mousse and truffles with ramyun noodles).
Price per person: From ₹922/US$12; jejunoodlebar.com

Located within a 1920’s industrial-sized greenhouse, set beside
a meandering canal, this unique restaurant was one of the first exponents of the farm-to-plate concept. The expansive surrounding farm produces over 300 varieties of vegetables, herbs, and fruits;
to guarantee freshness, the produce is harvested just before a dish needs to be prepared! The dining experience is casual yet sophisticated with an abundant use of natural materials reflected in the décor, further echoing the honesty of the produce. The afternoon and evening menus are fixed and there is a choice of three to six courses depending on the time of day you dine. The food is simply prepared showcasing the bounty of Nature with a focus on Dutch home-grown products combined with international tastes.
Price per person: From ₹3,174/US$41 to ₹5,652/US$73; restaurantdekas.com 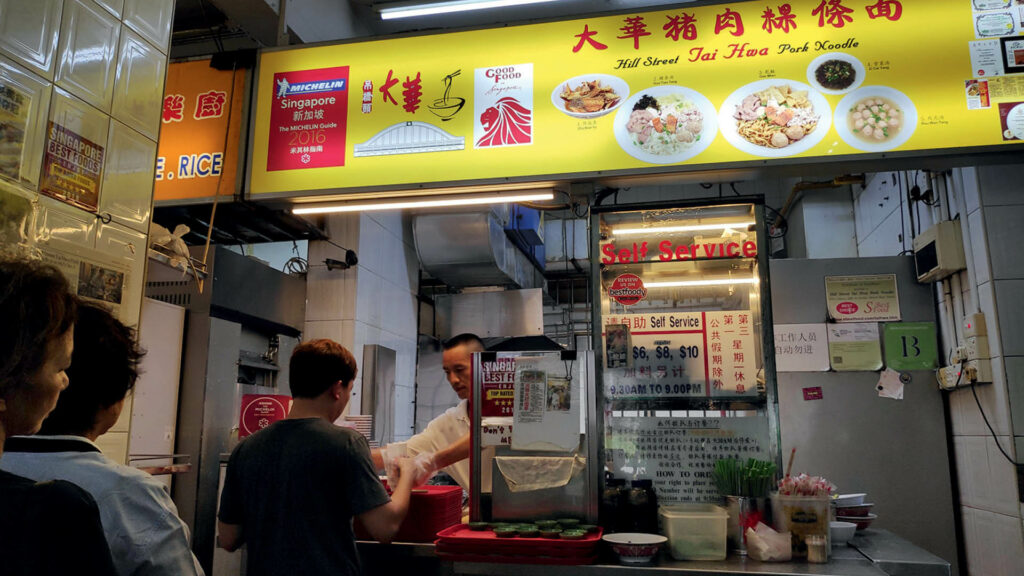 Who would have ever thought that this unassuming hawkerʼs stand would carry a Michelin star? It certainly has the longevity and pedigree as it was established in the 1930s and gained its Michelin star in 2016. Dishes start at only
₹309/US$4, so be prepared for excessive lines. The signature offering is Bak Chor Mee, a delicious medley of minced meat, sliced mushrooms, and noodles tossed in black vinegar, available in both dry and soupy versions. The dish offers a virtual explosion of flavours in your mouth—spicy, savoury, tangy with a hint of sweetness from the meat, all in one mouthful. The combination of fresh local ingredients and home-made chewy al dente noodles explains the 90-year-old love affair loyal patrons have with this dish. taihwa.com.sg