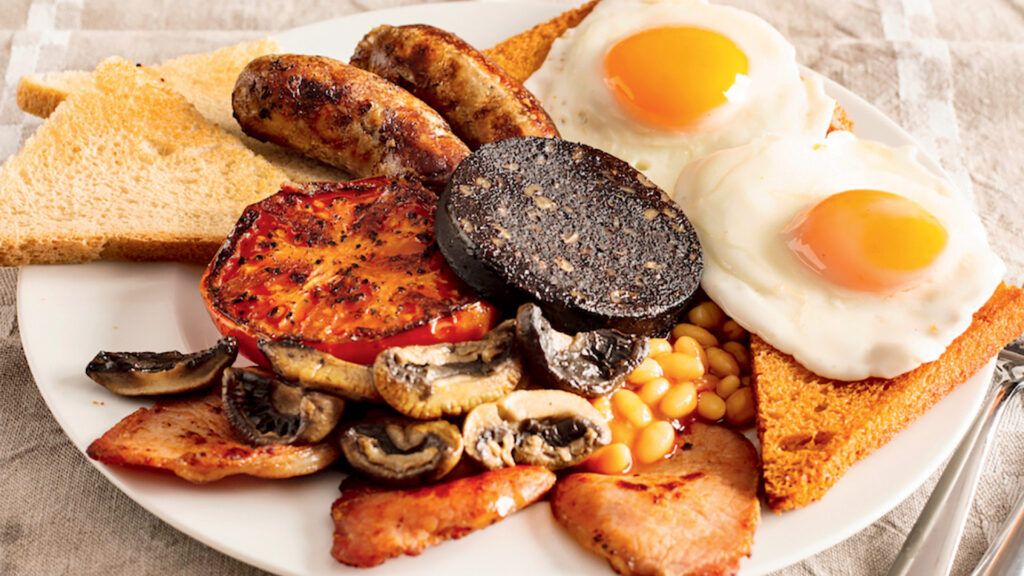 A veritable melting pot of cultures, London is brimming with iconic dishes that have become representative of the gastronomically diverse city. Check out these seven mouth-watering options.

“THE BEST WAY TO KNOW A CITY IS TO EAT IT.”
SCOTT WESTERFELD, AFTERWORLDS

Arguably one of the world’s most versatile destinations for international cuisines and flavours, London is a treasure chest of epicurean discoveries. Often it’s not just the food that’s unique, but also the history behind it and the experience that binds it to a city.
And as I embark on a culinary journey through London, my starting point is Fortnum & Mason and its Executive Pastry Chef Roger Pizey, who has worked closely with the world’s best chefs, including British restaurateur Marco Pierre White.

ALL DAY ENGLISH BREAKFAST AT A GREASY SPOON: ANDREWS RESTAURANT

A typically English phenomenon, a greasy spoon is basically a café that has no pretensions but serves great basic, non-health-conscious food. Think Harry Potter and the café in which the gang is attacked in Harry Potter and the Deathly Hallows. Without a doubt, the best thing to order here is a full English breakfast and hot sweet tea.
Did you know? A typical English breakfast is often known as a ʻfry-up’;
it includes fried eggs, bacon, sausages, mushrooms, tomatoes, fried bread, and often a slice of white or black pudding.

THE SCOTCH EGG AT FORTNUM & MASON

It’s hard to believe that the humble Scotch egg found in nearly
every service station up and down the UK had prestigious origins. Interestingly, the dish has nothing to do with Scotland but was potentially inspired by the Nargis Kofta, a recipe brought back by the East India Company from India. The Scotch egg consists of sausage meat wrapped around a soft-boiled egg and then coated with breadcrumbs and fried—a truly delicious treat, whether eaten
hot or cold.
Did you know? The name Scotch comes from the process of preparing the sausage meat wherein anchovies were added to ʻscotch’ (cut through) the fattiness of the meat.

AFTERNOON TEA AT THE PALM COURT, THE LANGHAM HOTEL

There’s nothing more quintessentially English than British Afternoon Tea at the Palm Court. Invented by the Duchess of Bedford and introduced to the elite classes by The Langham in 1865, it instantly sparks visions of classic finger sandwiches and cakes served with excellent tea. Recently, Chef Michel Roux Jr. and Executive Pastry
Chef Andrew Gravett at The Langham reinterpreted it to celebrate traditional British biscuits.
Did you know? There is a difference between High Tea and Afternoon Tea—High Tea is an after-work meal, whereas Afternoon Tea is served around 4 pm to satiate one between lunch and dinner.

PIE AND MASH AT M.MANZE BERMONDSEY

Pie and Mash first came to prominence in the late 19th century and originates from the docks and their workers in London. One of the original places to try this is M.Manze at Tower Bridge—a favourite haunt of David Beckham. The pies consist of a flaky pastry case filled with meat. Traditionally, as in the Cornish pasty, the pastry was there just to protect the filling; now, the pastry is an equally delicious part of the experience.
Did you know? Pie and mash is usually served with liquor, which is actually a parsley sauce prepared using the liquid from another working class London dish, stewed eels.

A true example of food diplomacy and cultural mixing, this is arguably Britain’s favourite dish. Interpretations of this exist in every single restaurant, takeaway, and supermarket ready meal—Indian Michelin Chef Vineet Bhatia has created a version and Marks & Spencer’s have two or three variants. Great places to try this include Brick Lane and one of the Dishoom restaurants across London.
Did you know? Chicken Tikka Masala is popularly referred to as UK’s national dish.

For me, Fish and Chips have to be made using cod. And while many recipes use haddock, plaice, and sole, I still prefer the meatiness of cod. Served with fresh chips and drenched in chip-shop vinegar is the only way to eat it. It is traditionally served with mushy peas; a more recent addition is curry sauce, which is a delicious accompaniment, but not very easy to find outside the north of England.
Did you know? Fish and Chip shops are commonly known as the ʻChippy’. The dish has been mentioned in literary classics such as Road to Wigan Pier by George Orwell and A Tale of Two Cities by Charles Dickens.

There’s something very English about the humble sandwich. Some
of the best options can be found at the historic Borough Market,
one of London’s oldest food bazaars. Hot roasted meat served with
a delicious sauce is the way to go, and my particular favourite is the roast pork and applesauce at Hobbs Roast. You can also try the chorizo and rocket sandwiches at Brindisa or the toasted cheese sandwiches at Kappacasein.
Did you know? The common sandwich we all love owes it origins to the Earl of Sandwich who wanted a snack to eat whilst gambling.